‘Over the Top’ began as a hunch. I was looking for an historical heroine as the subject for a new theatre show, and I was keen link with the act of collective remembrance provided by the World War One centenary. After several weeks of research, I came across the strange story of Dorothy Lawrence. Intrigued, I found an original copy of her 1919 book ‘Sapper Dorothy’ in the British Library, and booked my ticket to London. A few weeks later I was sitting in the reading room with a small rectangular box marked ‘Fragile Handle with Care’, tied with a white ribbon. Carefully, I unwrapped the parcel to reveal a slim silk-bound book with rather extravagant title: ‘Sapper Dorothy: the Only English Woman Soldier in the Royal Engineers 51st Division, 79th Tunnelling Co. During the First World War’. What jumped out of those pages was an exuberant and highly original voice, and one that completely confounded my expectations of what an early twentieth-century Englishwoman would sound like. Dorothy’s imperfect and artless style not only seemed entirely authentic, but also glossed over the dark reality of her adventure and its subsequent effect on her life. This unsaid experience lent itself to exploration through theatre. But there was also something else: one throwaway sentence at the end of the third chapter – ‘If my highly respectable guardian, living in that dear old Cathedral City could see me now, they would have forty fits.’

Having grown up in Salisbury this reference piqued my interest, and sent me on a research process over the next few months that turned up some amazing and unexpected discoveries – and which confirmed that Dorothy was, in fact, referring to the ‘cathedral city’ that I knew so well. A shared geographical point of reference gave me an immediate point of imaginative connection with Dorothy’s story, and added sharp poignancy to the end of her life, and to her relative anonymity. From the outset one of my intentions was to make a piece of theatre that enabled an audience to get under the skin of history, and I felt that the local connection provided this point of contact – a forgotten Wiltshire heroine for a Wiltshire audience.

The theatre production evolved over the next eighteen months. I worked with various collaborators to find the form that the story wanted to take, and eventually came to a ‘music hall’ concept. Research had revealed that Dorothy’s mother had been a musician: an unusual occupation for a middle-class woman living in late nineteenth century London, and a fact that seemed to offer some clues about Dorothy’s nonconformist character. Composer Natalie Brice and I spent a lot of time listening to shaky turn-of-the-century recordings of cross-dressing music hall superstar Vesta Tilley. We imagined a young Dorothy being taken by her mother to watch a woman who confounded Victorian gender norms whilst retaining her social acceptability. The figure of Vesta became an important part of Dorothy’s imaginative world in our show, embodied in the character of a female music hall MC in a man’s tailsuit.

Having two performers on the stage enabled us to explore opposing aspects of Dorothy’s story and personality simultaneously; and at the same time provided a central relationship that would give the show structure. We decided to set the whole show in one location: at Dorothy’s address in Islington at the time immediately prior to the book’s publication. This decision was inspired by a collection of Dorothy’s letters to her publisher written between 1918 and 1919, that present a poignant picture of a woman alone, struggling with financial difficulty and deteriorating mental health – but nevertheless determined and defiant. By setting the whole show in Dorothy’s room at 68 Marquess Road, we could imagine and dramatise the struggle that she had with herself – and in so doing celebrate the publication of her book for the remarkable achievement that it was.

The artistic process has been driven by the desire to celebrate Dorothy’s unusual voice and to ensure that it is heard in the Wiltshire World War One centenary celebrations. I have therefore sought ways to engage potential audiences throughout the development of the piece. We have run workshops with people in Wiltshire with ages ranging from thirteen to seventy years old; with the help of existing local arts initiatives we have made a short online trailer and a promotional film; we have given an impromptu street theatre performance in Salisbury city centre on a busy Saturday. During the final phase of the project, we have teamed up with arts and heritage specialists ‘Now Heritage’ to create a Heritage Engagement programme that has enabled us to work with ‘Wiltshire at War’ to build the lasting legacy for Dorothy in Wiltshire that we set out to create.

Emma Golby-Kirk of Now Heritage and I worked together to create new content about Dorothy and her Wiltshire connections for the back of one of the touring ‘Wiltshire at War’ exhibitions. The back of the exhibition seemed the perfect location for the new panel, emblemizing the place that Dorothy’s forgotten story occupies in the collective memory in Wiltshire. Alongside this record of who Dorothy was and what she did, we wanted to invite those who saw the exhibition to engage empathetically with the story. We decided to invite the exhibition audience to write a postcard to Dorothy as if she were alive today, and to display these postcards alongside the new panel. In this way the exhibition would evolve and gather content as it toured, and would give Dorothy the reception that she was denied in her lifetime. Emma commissioned textile artist Lorna Jones to create a beautiful material hanging inspired by Dorothy’s book, by her letters and by other source material. This material hanging would sit next to the other panel: an artistic response to Dorothy’s story displaying the empathetic reactions on the postcards.


The exhibition toured with the show during March this year, and we were able to use the post-show discussion that followed each performance to encourage the theatre audience to contribute postcards for the exhibition. These responses are varied and thought-provoking, and have raised several interesting questions for me as the project moves into its next phase.

I set out to investigate cultural preconceptions about gender, through examining the life of someone who didn’t conform. In order to do this, I needed to understand both the socially constructed norms of behaviour of the time – and also the indomitable spirit of the individual that reacted against them. I wanted the show to be the story of this indomitable spirit, rather than the story of its failure: a story that would inspire change, rather than reinforce the message that those who overstep society’s rules are doomed to failure.

In making this show, we have taken the time to look and imagine beyond the traces that remain of Dorothy’s life: both her words and those written about her. I hope that in so doing we have given ourselves and our audiences an opportunity to contemplate the indomitable spirit that existed beyond the particular circumstances in which she found herself – beyond barriers, beyond time, and beyond words.

How far a single theatre production can inspire lasting change is an interesting and challenging question. I have tried to stimulate a deeper level of audience engagement through the heritage activities that have run alongside the show – nevertheless our work feels like a tiny drop in the ocean. All the same, I feel encouraged by our audiences’ responses to Dorothy, as they feel like an encouragement to anyone who attempts to do something new, no matter how small or imperfect it may feel at the time.

I want to thank you, Dorothy: your step into the unknown has inspired me to make mine.

You can view the rest of the postcards to Dorothy at the end of this page.

The true-life tale of Dorothy Lawrence

Education programme developed in collaboration with Now Heritage, in partnership with ‘Wiltshire at War: Community Stories’; funded by the Chalke Valley History Trust, and by Wiltshire Council through the Corsham Area Board.

This show has been developed with the support of The Pound Arts Centre in Corsham and The Natural Theatre Company in Bath. 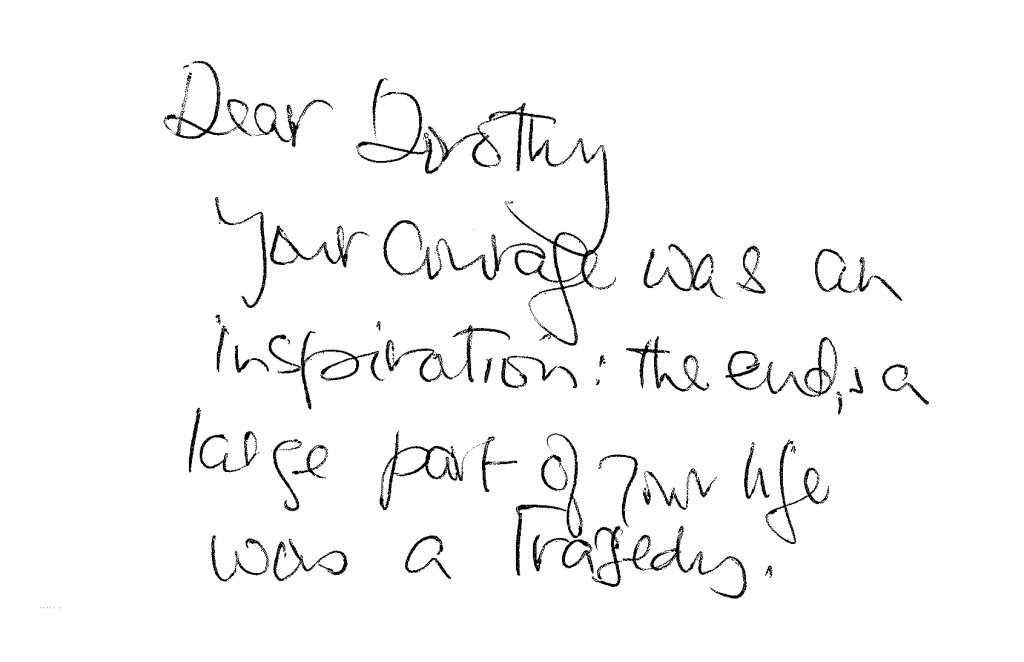 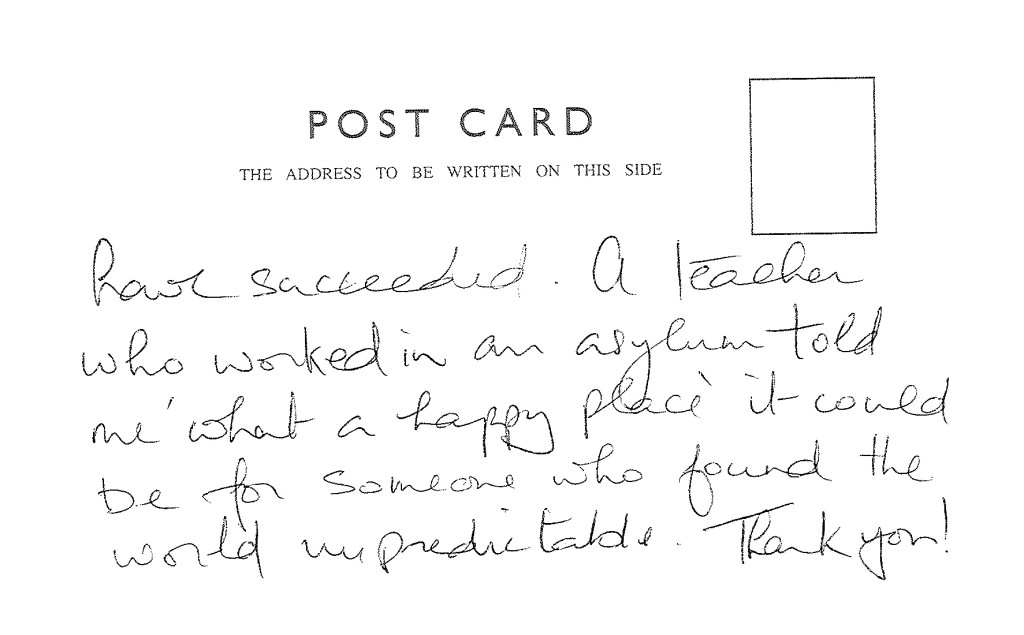