On Wednesday 3 September 2014, Market Lavington museum invited people to pop in and share their passed down family stories about life in the village during World War I.

Carol Treloar talked about her grandfather, Frank Davis who sent food from his smallholding to the military hospitals in London.

Mary Cooper presented a book to the museum telling the story of her grandfather Sydney Herbert Cooper (1879 – 1951) who served in the Royal Field Artillery. After the war, like so many others, he bought a small-holding with his war pension so he could live a quiet life. He probably had shell shock. 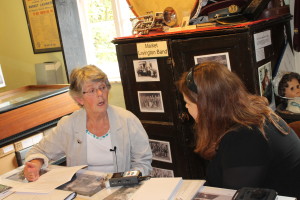 were recorded as part of the Wiltshire at War: Community Stories project and will help to tell a wider collective story of Wiltshire’s response to the events of the First World War.